Outhreach is becoming an increasingly important yardstick for the relevance of scientific research.

This years first snow welcomes the participants at Finse on the opening day.
Photo:
Kerim Nisancioglu

The Norwegian Research School in Climate Dynamics’ weeklong course at Finse aimed to teach young scientists how to improve their communication skills and be clear about their message.

Students and professionals in the natural sciences are, with the exception of a precious few, notoriously inept at communication outside of the academic journal.  And, let’s be honest, the style of writing and manner of communication employed in this publication format is seldom captivating.  It was with this in mind that ResClim launched the first incarnation of a course in Scientific Communication.  The course, which ran over 5 days at Finse Alpine Research Centre, is the brain child of Kerim Nisancioglu and Frede Thorsheim.

Prior to the start of the course, participants were given the opportunity to select one of three possible focus groups: Turspor would be tasked with preparing a guided field tour for visiting school pupils; Presentasjon were to prepare a popular science lecture; and Kronikk were asked to write an article for a local or national Norwegian newspaper.

The 18 participants from the Geophysical, Earth Science and Biological Institutes of UiB left Bergen train station early on Monday, 16 September and arrived in Finse as the first snow began to fall.  Shortly after arrival Kristian Vasskog led the group on a field trip, introducing some of Finse valley’s geological features and explaining the hypotheses of their formation.

The following two days consisted of both lectures by specialists and group work.  Camilla Aadland discussed the different forms of the popular scientific article and gave some tips on how to approach writing one.  Stein Dankert Kolstø lectured on the difficulties of, and approaches to, communicating science in the classroom.  His presentations also touched on some of the more philosophical topics related to teaching, knowledge acquisition and understanding.  Teacher Åse Heilund Midttun, herself a former weather forecaster and student at the GFI, outlined the curriculum of the school subject Earth Sciences (Geofag).  This subject was introduced at secondary schools in Norway in 2006 and has attracted students interested in a wide variety of future career paths.  Having a number of years’ experience as teacher at Sandsli Vidergående Skole, her input helped prepare the young scientists for their coming interaction with the visiting secondary school pupils.  VilVite’s Nils Petter Hauan closed the formal part of the course by showing how science centres disseminate knowledge and communicate concepts to the general public in a more interactive manner.

On Thursday 56 pupils from Sandsli Vidaregående Skole and Bergen Privat Gymnas joined the young scientists.  All had chosen Earth Sciences as school subject and came to observe first hand some of what is being taught in the classroom.  Since selected topics from geology, meteorology and glaciology are included in their curriculum, a trip to Finse presented the ideal locale for such a field trip.

The pupils were divided into groups of around 10 and assigned 2 Turspor tour leaders each. These small groups stopped at different field stations to examine and discuss specific topics.  After the field trip four of the pupils from the group guided by Iselin Medhaug and Mathew Reeve gave their impressions of the day. From their responses it was clear that the site visit, which set out to broaden their knowledge and encourage engagement with their studies, was a success.  Despite Iselin and Mathew not being trained geologists, the two field guides (from oceanography and meteorology respectively) impressed with their knowledge.  The pupils commented on the contagious nature of their enthusiasm, which inspired them to pay attention to what was being explained.  When asked whether they would recommend the subject and field trip to their peers, the answer was a unanimous yes.  Kristoffer Fause and Julie Sortland, both in their first year of studying Geofag, remarked that although there was a lot of new information, they were able to recognise much of what they had seen in their textbook.  Being more familiar with the subject matter, second year Geofag students Susanne Fjellheim and Nicolas Lone, emphasised that some background knowledge made knowing which features to look out for easier.  Having heard the different terms and expressions in advance was definitely an advantage, especially when the researchers were explaining the different phenomena in the field.  They all agreed that observing for themselves how the different forces had shaped the landscape around them improved their understanding and was definitely a great motivator.

Whether their future studies will be related to the field of Geosciences is uncertain.  “Geoscience is a rather broad topic, and there are so many interesting topics to delve into,” remarked Nicolas. He and Susanne are considering careers related to the petroleum industry, so furthering their studies at one of the departments related to geoscience is an option they are considering.  Not all of the pupils may pick up the geological hammer, but many of them are sure to regard natural sciences in a different light.  And should they return to Finse, whether to hike or cycle, they will at least be able to point out a Finse granite.

(PS. if you’re not sure yourself, go have a cheat-peak at one in the geological collection of the University Museum, Harald Hårfagresgate). 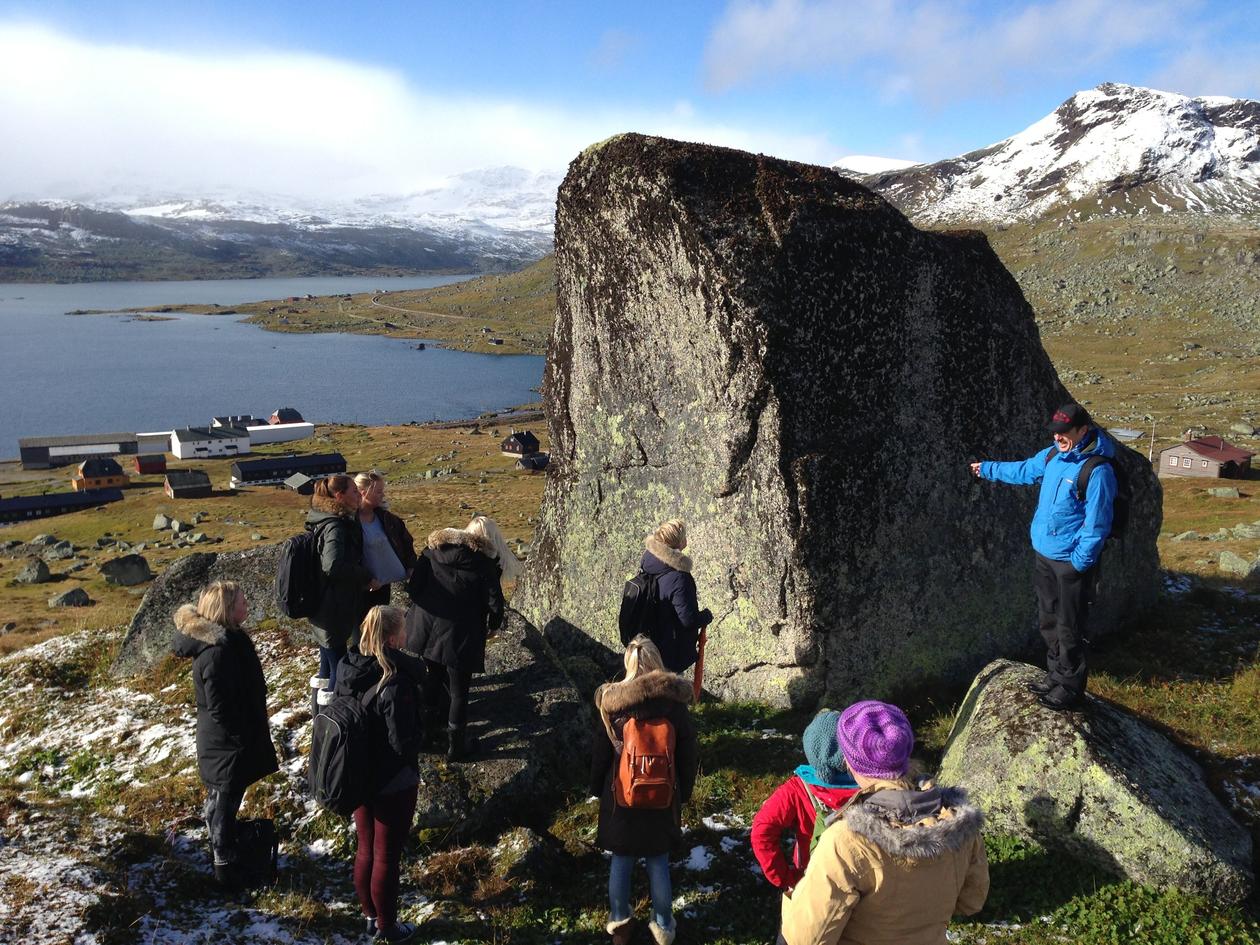