The University of Bergen (UiB) is a research university with a high international profile and high academic standards. Research, education and dissemination are its main objectives and academic breadth, diversity and high quality are its foundations.

The targeted focus on quality produced good results in the international context in 2009. From 2005 until 2009, the university has climbed 176 places on the Times Higher Education Supplement’s annual ranking of universities. This positive development is also reflected in the research publication statistics: the total number of publications at UiB increased by more than seven per cent from 2008 to 2009.

Climate research at UiB will probably be granted the funding it requires to maintain its place at the forefront of research on climate issues. The Bjerknes Centre’s status as a Centre of Excellence expires in 2013. However, the government will now allocate annual funding of NOK 20 million to enable it to continue its climate research, on the basis of the centre's expertise.

In 2009, 223 candidates defended their doctoral theses. UiB succeeded in recruiting young researchers from abroad, and around 30 per cent of the new doctors are foreign, which helps to raise UiB’s profile as an international research university.

In 2009, the government allocated NOK 30 million to the plans to restore Bergen Museum’s venerable main building and turn it into a centre for culture, dissemination and hospitality. This stately building was given special mention in the national budget, and the Ministry has asked Statbygg to plan and carry out the restoration work, which the university hopes will be completed before the anniversary of the Norwegian Constitution in 2014.

In 2009, the University of Bergen saw a 13 per cent increase in the number of applicants. This is above the national average and illustrates that UiB is still one of the most attractive educational institutions in Norway.

In 2009, work on renewing UiB’s strategic plan for 2011-2015 got under way, with the main objective of further raising UiB’s international profile as a research university.

In 2009, the University of Bergen saw a 13 per cent increase in the number of applicants. This is above the national average, which was an increase of eight per cent.

The building that currently houses the Natural History Collections is set to become the university and Bergen's new showcase venue.

An extra allocation of funds means that climate research in Bergen will continue to have secure financing after the expiry of the Bjerknes Centre’s status as a Centre of Excellence in 2013.

In the space of one month alone, three research groups at UiB were awarded a total of NOK 60 million by the European Research Council.

The University of Bergen is the first university in Norway to have an action plan for cooperation with society at large and the business community.

In autumn 2008, the University Board decided that the University of Bergen should have an elected rector, and an election was carried out in March/April 2009.

The mummies at Bergen Museum made a historic visit to the doctor’s in February when they were carried down the stairs at the museum and transported to Haukeland University Hospital.

Having mapped the ocean’s absorption of CO2 for five years, the researchers working on the CarboOcean project have concluded that emission limits are not stringent enough.

Semester start on a grand scale

For the first time ever, the academic year was officially opened at Muséplass 1, and the square in front of Bergen Museum was packed with students and employees in beautiful August sunshine.

A total of 223 persons completed their doctoral degrees at UiB in 2009, and, on 29 January, the 108 new doctors from the autumn semester were celebrated at the Håkon's Hall.

UiB strengthened its position as a research university with a high international profile in 2009, with the university jumping 83 places on the Times Higher Education’s ranking list.

The 'Research Days’ festival was held in the second half of September under the main theme of ‘Sustainability and Evolution ‘.

Philosopher and philosopher of science Ian Hacking was awarded the Holberg International Memorial Prize for 2009. 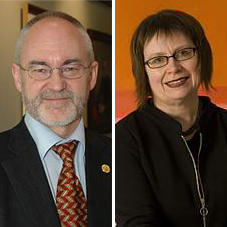