Fragments from the Past

How did royal power and government apparatus develop in Norway in the Middle Ages? How did new legislation contribute to a state with courts of justice and judicial power?

These are the main themes of the Middle Age exhibition Fragments from the Past this autumn, which opens on Tuesday 30 August at 13:00 in The Cultural History Collections, Bergen Museum.

The Middle Age exhibition Fragments from the Past is now presenting two new themes; State and Royal Power and Law and Justice.

During the Middle Ages, Norway became a kingdom with a nationwide administration based on a European model. The ideology of the kingdom built largely on the church’s ideals, and this relationship was characterised by both collaboration and conflict.
Between 1274 and 1281, King Magnus the Law-mender had four common codes of law made, of which Landslova and Bylova are the most well-known. With the help of the legislature, the Norwegian kingdom was to be transformed and governed according to God’s intention and will for the human race.

Themes Spring 2012
Penance and Remission and Sagas and Saga Writing

(The lectures will be in Norwegian.)

Fragments from the Past is a collaborative project between the Centre for Medieval Studies (CMS) and Bergen Museum at the University of Bergen. The exhibition will be open for two years ending summer 2012, and it will be renewed every half year presenting both new themes and new material from the Museum’s collections. The project is part of one of UiB’s focus areas within medieval research. 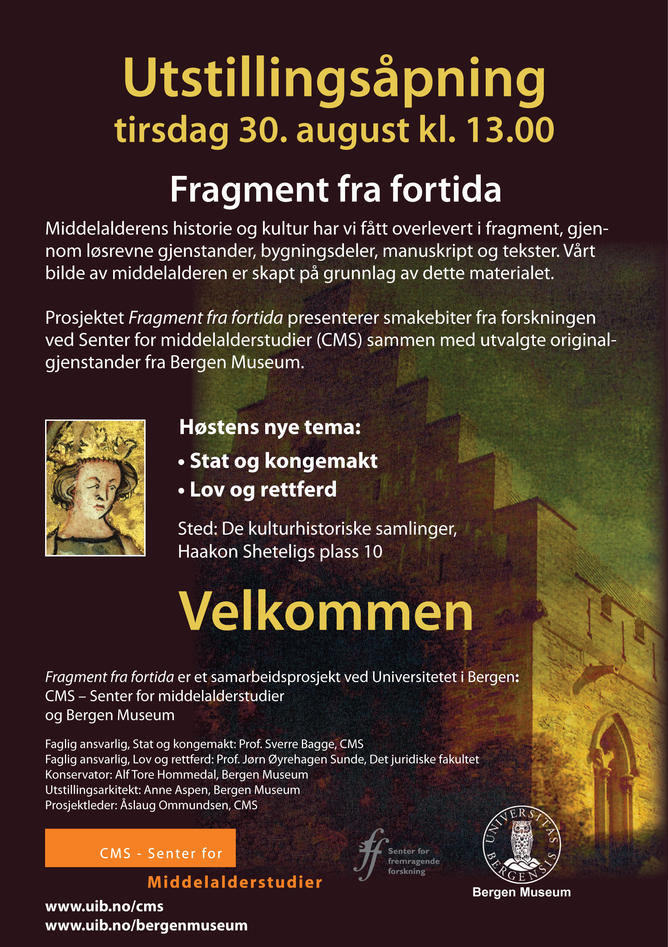