22 JULY AT TEN: In hosting this event which features leading global stakeholders in the fight against terrorism and right-wing extremism, the hosting University of Bergen research groups wish contribute to shaping those solutions. The programme 25 August will be broadcast live from the University Aula in Bergen.
Producer:
UiB

The appalling attacks in Oslo and Utøya shocked the world and took the lives of 77 Norwegians, mostly children. They were killed on account of a transnational extreme right ideology, which was digitally broadcast on the day of the murders by the self-directed terrorist. The murders were, he said, “advertising” for his so-called manifesto. Norway’s darkest day destroyed lives and communities. It also raised acute questions about online radicalization, “broadband terrorism”, and the destructive power of a lone actor motivated by radical right extremism.

Ten years on, what lessons have been learned? What can societies and global organisations do better in order to stop extremist radicalisation and terrorist content, especially online?

Drawing upon the pivotal "Christchurch Call to Eliminate Terrorist and Violent Extremist Content Online'', issued in the wake of a more recent lone actor attack murdering 51 innocents, this discussion forum will address these questions, while looking to the future for dynamic and workable solutions.

In hosting this event which features leading global stakeholders in the fight against terrorism and radical right extremism, the hosting University of Bergen research groups wish to contribute to shaping those solutions.

This will be a hybrid event, combining on-campus elements in the University Aula with streaming and digital participation. 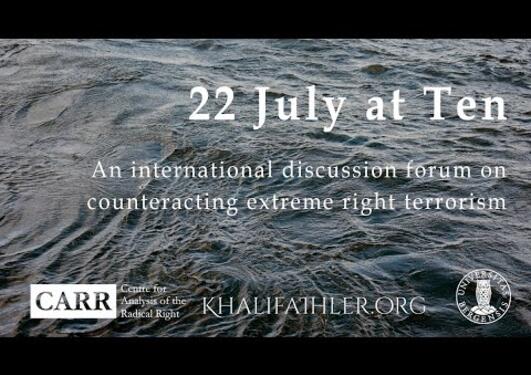 High-level summit at the University of Bergen: Global counter-terrorism after 22 July

What can society and global organizations do better to stop right-wing extremist radicalization and terrorist content online?