While attending a conference through her research on biocorrosion, Roalkvam had the opportunity to exchange ideas with researchers working in companies and outside academia. While these researchers may have had a greater focus on issues such as effectivity, consequences and cost than academic researchers, Roalkvam noted that they also often considered questions on scales much vaster that those that are normally addressed in academic research labs.

Roalkvam finds that having to think about things from different perspectives is very interesting. In the lab, researchers often break complex issues such as biocorrosion down into simpler, component parts, involving particular microbial species, for example, because it is easier to study a simpler system. However, the “real-life” situation, microbes do not exist alone and the consortia interactions between them are still poorly understood, even after over 80 years of study into the phenomena of biocorrosion.

Roalkvam finished her PhD in 2012 (read more in Norwegian). Since then she has been involved in a number of projects, a number of which are yielding concrete results. In 2015 alone, Roalkvam has been a co-author on 6 papers. For 2 of these, she is first author – an impressive production record for a young researcher. One of these latter included the first published results about one of the Centre for Geobiology’s (CGB’s) most recent hydrothermal vent find; a field called 7 Sisters, which was found summer 2014.

In the paper Roalkvam and colleagues characterise a new bacteria strain, Hypnocyclicus thermotrophus. One of the colleagues involved was an exchange student from the University of Jena, Germany. Roalkvam was supervising and training him in the art of cultivating anaerobic microorganisms. According to Roalkvam, it was a productive collaboration, and she notes that not every student’s exchange period involves the chance to cultivate and characterise a new microorganism!

When a new organism is characterised, researchers must also give it a name. Roalkvam collaborated with Classical Greek Professor Pär Ola Sandin at the Faculty of Humanities in the naming process to ensure that the name was both informative and grammatically correct. (from the paper: “Hypnocyclicus (Hyp.no.cyc’li.cus. Gr. masc. n. hypnos sleep;nGr. adj. kyklikos round or ring-shaped; N.L. masc. n. Hypnocyclicus an organism that sleeps as a ring: thermotrophus (ther.mo.tro’phus. Gr. adj. thermos warm; Gr. masc. n. trophos feeder; N.L. masc. adj. thermotrophus feeding under warm conditions”).

In addition to publishing papers, Roalkvam has been active disseminating her results in other ways. In the last year, she has been an invited guest lecturer, awarded a conference poster prize and invited to write a book chapter (entitled, “Microbiologically Influenced Corrosion in the Upstream Oil and Gas Industry” and edited by Torben Lund Skovhus who is a Researcher and Project Manager at VIA University College the Danish Technological Institute).

For many years Roalkvam has been sharing an office with fellow CGB researcher Ingeborg Elisabet Økland. Whereas Roalkvam came to CGB as a microbiologist, Økland come from a background in Environmental Geology. Not only are there different “languages” between the different disciplines, but the approaches to problems are fundamentally different. Being surrounded by colleagues with different approaches and different “languages” has helped Roalkvam to learn to think differently – especially, she notes, with respect to time and space. Geologists, she says, have more of a tendency to think globally and over periods of thousands of years.

Roalkvam relates a story of how researchers from either predominantly biology or geology disciplines approached the study of a sediment core sample differently.  The biologists were interested in starting at the top in the surface, most densely inhabited layers and then would work their way down, while the geologists wanted to start from the bottom with the lowest and oldest layers and then work their way up! Roalkvam underlines the importance of having both geochemical and microbiological data from the same sample material. She says that it gives her the unique possibility for undertaking more in-depth microbiology studies that include supporting geological and geochemical back-ground data as well as providing her with concrete opportunities for interdisciplinary discussions during the research and write-up processes. This helps to build a stronger understanding of the environments being explored by CGB. 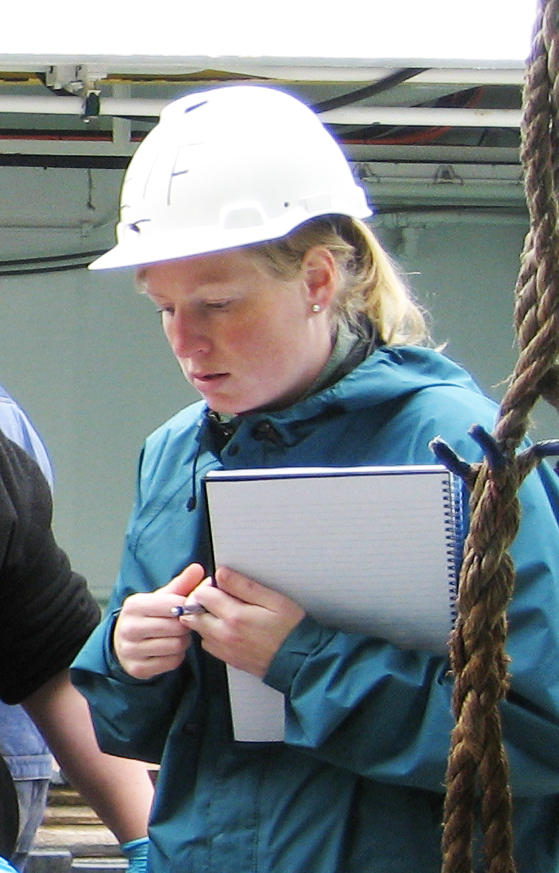