A geologist looks back

Professor Brian Robins is retiring after 41 years at the University of Bergen and 50 years since his first field trip!

The vast spans of geological time are often difficult to grasp. 50 years of enthusiastic involvement in geology is also impressive.

Professor Brian Robins retires on the 31st of March at an age of 67 and after 41 years in the service of the University of Bergen. In this conversation with the head of the administration of the Department of Earth Science, Terje Erstad, he looks briefly back at his career at the university and forward to life as a senior citizen.

Having a father that worked in coal mining and a mother that was a geography teacher it is probably not surprising that I collected minerals, rocks and fossils as a child. I must have found this fascinating because I was given a copy of a serious textbook in geology (”Principles of Physical Geology” by Arthur Holmes, a book that inspired many generations of British geologists) on my 12th birthday! I was also very fortunate to attend the then brand new Rutherford Grammar School in Newcastle (in NE England) where there was both a specialist geology teacher and a well-equipped laboratory, so I was able to begin to study at an unusually early age. I went on my first geological excursion, to the Island of Arran in Scotland, during Easter in 1962, almost exactly 50 years ago!  Curiously, since then I have been back to Arran many times with students from Bergen on field courses in geological mapping.

How did someone from Britian end up in Norway?

Well, I carried out field work in Northern Norway for my PhD thesis. While I was an undergraduate at the University of Leeds I met Brian Sturt who held a typically enthusiastic guest lecture about his research in West Finnmark, which for us was a very remote and exotic area. This chance encounter led eventually to my acceptance as a PhD student connected to the project. My first trip to Finnmark was in July 1967, with the Leda from Newcastle to Bergen and then on with the coastal steamer Finnmarken to Hammerfest and a local ship to the village of Hasvik on the island of Sørøya. I had my wife with me (we were in fact on our honeymoon!) and we eventually pitched camp in the deserted Olderfjord on the east coast of the island of Seiland with a small boat as our only contact with the outside world. Later on we rented a room with a very hospitable local postman and his family in the village of Altneset. After three quite long summer seasons of geological mapping and sampling on Seiland we felt that we had acquired some basic knowledge of the Norwegian language and culture so that when Brian Sturt was offered the chair in Bergen that was vacant after Nils-Henrik Kolderup we readily agreed to move to Bergen. I was first employed as a scientific assistant in a research project supported by the Norwegian Research Council and shortly afterwards, in January 1971 as a University lecturer at the then Department of Geology, section A.

What was the Geology department like in the 70’s?

Having studied at relatively large and modern departments in Leeds and London our first meeting with the department in Bergen was quite a shock. The scientific staff was few in number, the buildings were old and there was little scientific equipment and almost no laboratories. But the future held promise: The department had enthusiastic postgraduates, a new science building was in the planning and an increase in staffing was imminent due to production of petroleum in the North Sea. Fortunately, Director Arne Halvorsen and Vice Chancellor Arne-Johan Henrichsen were both very positive to modernisation and expansion. One of the first things we did was to clear out the cellar and ground floor of our building, Frielesgaten 1, using quite literally a sledge hammer and brute force, and we established a rock store, a crushing room and a small analytical laboratory. The department was then responsible for the Geological Museum and we spent many long, dark evenings sorting through collections and renewing exhibits for the museums 150-year jubilee (in 1975), that was to be honoured by a visit by King Olav. All the departments’ staff and postgraduates were lined up in white lab coats on this auspicious day to proudly shake the Kings hand!

Moving into the new science building in 1977 was an important departmental milestone – we now had spacious offices and purpose-built laboratories as well as modern equipment. But the actual, physical removal we did ourselves!

What type of research have you carried out and which results are you most proud of?

My research has consistently been based on observations and samples collected in the field. For a long time my main interest has been in processes that have taken place during the cooling and crystallisation of large bodies of magma (rock melt) in the crust of the Earth, such as are found beneath active volcanoes. I have attempted to reconstruct these processes by studying solidified, fossil magma chambers, so-called layered intrusions, which are now exposed and accessible on the Earths surface, as well as by analysing sequences of volcanic rocks. In both instances the layering, or stratigraphy, provides a relative time scale. I have studied several Norwegian layered intrusions, the Rognsund, Lille Kufjord, Hasvik and Honningsvåg intrusions in West Finnmark, as well as the Bjerkreim-Sokndal intrusion in Rogaland. Magma chambers generally crystallise inwards from the walls and downwards from the roof but mainly upwards from the floor. By analysing the layered sequences that formed on the floors of magma chambers one can reconstruct important processes and events during the evolution of a particular chamber, such as fractional crystallisation, different types of convection, influxes of new magma, mixing of different magmas and melting of incorporated fragments of the surrounding rocks. Probably my most important contribution to this research has been the evidence we have uncovered in Norwegian intrusions for chambers that were filled with magma that was stably stratified with respect to composition, temperature and density.

Who have you worked with most?

Apart from Harald Furnes in my own department, I have had a long collaboration with docent J. Richard Wilson at the University of Århus. Our two careers have been remarkably similar – we were both educated in Great Britain and were appointed at Scandinavian universities at about the same time – and we have shared the same passion for layered igneous intrusions. We and our students have mapped in detail Norway’s largest layered intrusion, the Bjerkreim-Sokndal intrusion in Rogaland, and have analysed innumerable rock samples collected from sections through it. This work has taken us nearly 30 years!

What do you intend to do during your retirement?

Most of all I am looking forward to fishing for trout, preferably with a good fly rod! There are many lakes and rivers I would like to explore. Otherwise, I enjoy reading and have three children and 7 grandchildren that I can spend more time with. And there are still cars to be washed, polished and repaired. I think that I shall be able to occupy my time! I imagine that I may occasionally miss going to work - but it will surely pass! 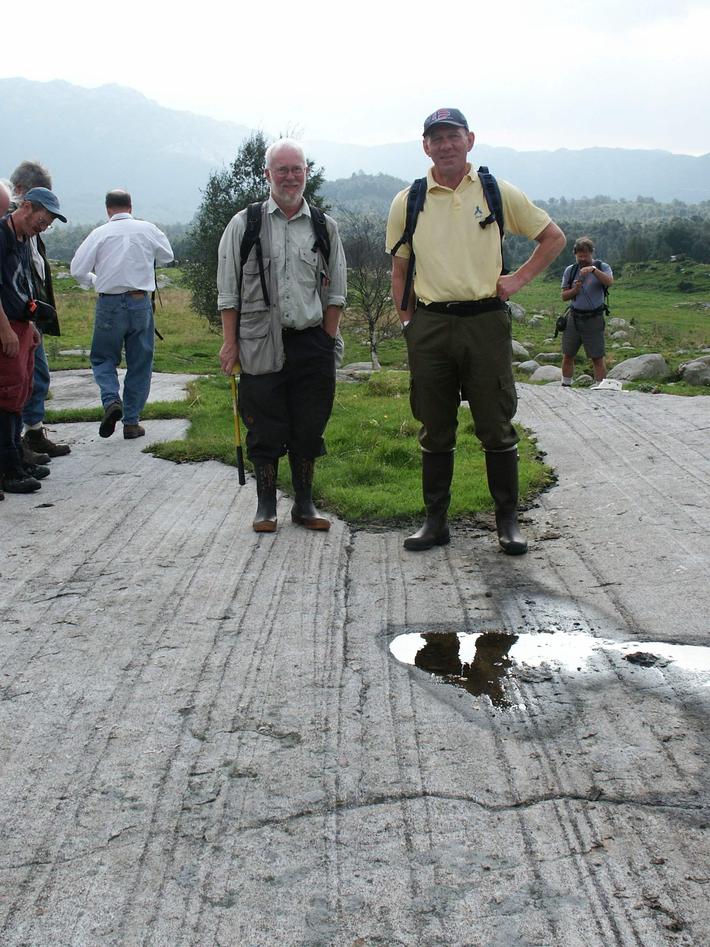 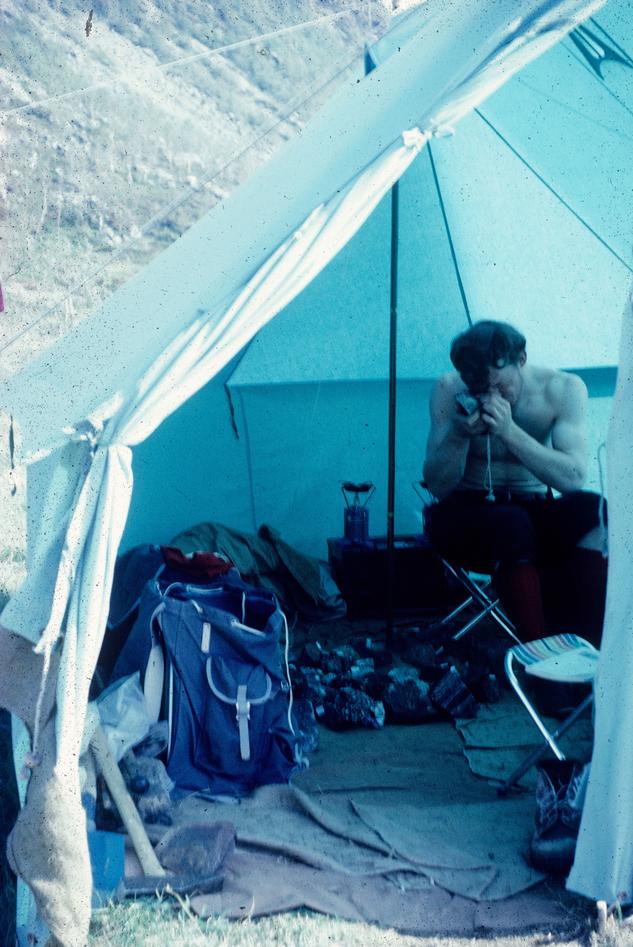 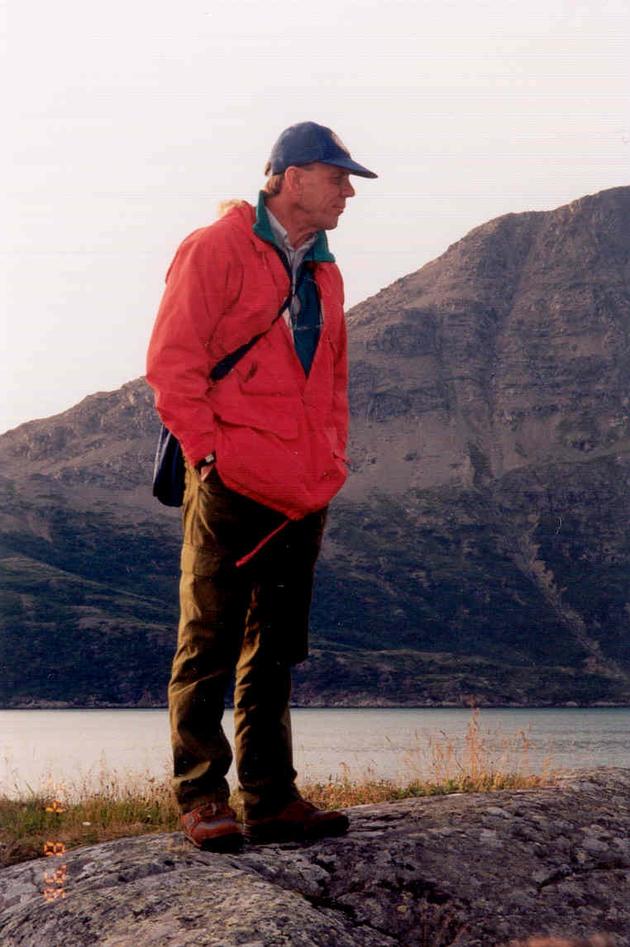