Skip to main content
Faculty of Humanities
Researcher to watch

SEASONAL CHANGE: Scott Bremer is looking at how we can re-learn and adapt to seasonal change in new ways.
Photo:
Eivind Senneset

“I am intrigued by a growing trend I see, where a lot of our old understandings of weather and seasons are now failing, but in many cases they cannot be replaced by modern climate science, because the science is too uncertain, says Scott Bremer, researcher at Centre for the Study of the Sciences and the Humanities.

In this gap between the old and the new, Bremer is looking at how we can use science with other forms of climate knowledge for the best possible understanding of weather and seasons, in a context of rapid climate change.

"My unique research path helped me discover changing seasonal representations as an important gap in the climate adaptation scholarship. I first realised this in a pilot project in Ananthapur, India, in 2014. Local farmers said traditional proverbs linking weather and agricultural activities in two-week ‘karthi’ periods were no longer reliable, but when asked if meteorological predictions could help they rejected them, noting the nearest weather stations were hundreds of kilometres away. Farmers chose to plant crops according to karthi, knowing they were detached from reality but needing some reason to guide their work".

Later, in northeast Bangladesh, working on the TRACKS project (Transforming Climate Knowledge with and for Society), Bremer again saw poorly performing representations, with one teacher saying:

"We have commonly taught that Bangladesh is a country of six seasons, but actually nowadays we can only distinguish between the summer and the rainy season, and winter".

Today Bremer is looking closer to home, as part of the JPI-funded CoCliServ project.

"Im looking at how people in Bergen live according to the weather and seasons, how the local climate makes this place special, and what information people need to best adapt to variability and change in this climate, including to the seasons".

The seasons have always played an important part in how we structure our lives. In many places, including Norway, key institutions and industries are using their ideas of seasons as a guide to plan for their yearly activities. A straightforward example is the farming industry that is dependent on seasonal changes for planting and harvesting crops for instance. But seasonal representations are also important when organizing institutions such as hospitals and schools, like for planning flu vaccinations, or school holidays. However lately, in some places, the seasons have become less distinct and more unpredictable, with shifting weather throughout the calendar year. Bremer explains:

“The issue is that our ideas of seasons increasingly do not match with the weather we are actually getting. For instance, a UK study asked people about what they thought was a normal Christmas. While many people talked about a ‘white Christmas’, large parts of the UK hadn’t had Christmas snow for more than 40 years. Under climate change, many of our ideas of seasons might be out-dated.”

This is why rapid seasonal change forces us to rethink our relationship to seasons. But asking institutions to change their ideas of seasons is not easy. It has major repercussions.

“A small change in how we perceive a season can release a domino effect, which can cause a great impact structurally, culturally and financially. This is why we hesitate and put off changes even when we know we need to adjust”, says Bremer.

But some places have started to change to meet these challenges. For example, groups in New Zealand have observed that school holidays are increasingly out of sync with the summer weather:

“The school summer holidays are at the moment from Christmas to the end of January. However, some politicians are proposing to shift the holidays to February, because January is no longer as consistently hot as it used to be, and February is hotter and more uncomfortable for the kids to be in class”, Bremer says.

Whether the politicians will go for this or not remains to be seen. A change in school holidays will lead to changes in the holidays over the year for other professions and change the annual rhythm of family life. It will also have a substantial impact on other industries like tourism.

Are we giving up too much to experts?

In his research Bremer is also interested in whether we are ‘giving up too much’ to experts, referring to our tendency to give up responsibility for understanding climate and weather to science-based forecasts, or large computerized climate models. We are forgetting the other types of traditional or local knowledge of weather and seasons we used to rely on. We don’t trust in our own readings of the natural signs of the weather

“I sometimes find myself looking at the forecast apps on my phone without as much as looking up at the sky or feeling the temperature.  I think we need a more varied knowledge base to understand our local weather and climate, with information from various sources and actors, and where we take responsibility for re-learning the climate we live in".

Bremer argues that with so much uncertainty attached to forecasting the weather and seasons in some places, and to predicting future climate change, this opens up possibilties for considering all kinds of weather and climate knowledge and seeing how each can help us live in a changing world. 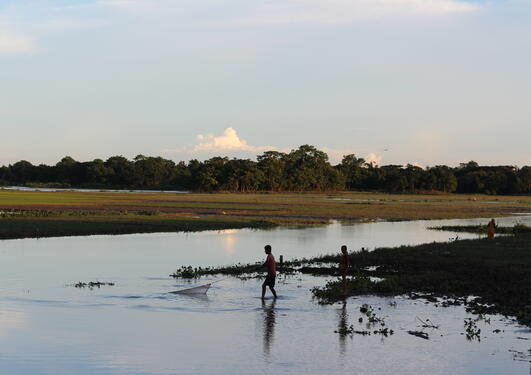 On track with climate change

Bangladesh is one of the most vulnerable countries in the world to climate change. Scientists from UiB have worked together with communities around Sylhet, in northeast Bangladesh, in search of new ways for understanding and adapting to the climate.