Skip to main content
Centre for International Health
In memorium

Obstetrician Robert Byamugisha epitomises some of the challenges and rewards of being a part of CIH’s competency-building activities in international health.

This week colleagues at the Centre for International Health (CIH) join Byamugisha’s family, friends and colleagues in Uganda in deeply mourning his passing. On 14 February 2014, Robert Byamugisha was seriously injured in a traffic accident in Uganda.  Wednesday 23 April, he passed away. He was 54 years old.

Byamugisha had been strongly involved in capacity-building in Uganda. It was his interest and recognition of the need for better services that led to him enrolling in CIH’s competency-building programmes.

Competency-building - a UiB and WUN priority

The importance of this activity was recently highlighted by University of Bergen (UiB) Rector, Dag Rune Olsen, at the recent annual World University Network (WUN) conference in South Africa. International Health is one of the four WUN research priority areas. Olsen stated that CIH spear-headed UiB’s networking and capacity-building efforts in international health.

CIH has over 25 years’ experience

CIH researchers have been capacity- and competency-building in low- and middle-income countries, primarily in Africa and Asia, for over 25 years. They have built up a large portfolio of collaborative projects and clusters of collaborative research activities.

One such cluster is “Reproductive, child health and nutrition”. There have been a series of projects in this cluster dealing with prevention of mother-to-child transmission of HIV-1 (PMTCT). Obstetrician Robert Byamugisha began to be involved with this work in 2000. Byamugisha worked at the Mbale Regional Referral Hospital in Eastern Uganda and thus had first-hand experience with issues in maternal and child health. His concerns led him to become involved in the CIH competency-building programmes with first a Master Degree in 2006, followed by a PhD that he successfully defended September 2013. (Norwegian PhD press release)

Solutions with impact can be relatively simple!

Byamugisha was first involved in work with pregnant women. This work  contributed to a health reform in Uganda in 2006 whereby routine HIV-testing became part of prenatal treatment programmes. His doctoral thesis dealt with the role of fathers in preventing mother-child HIV transmission in Uganda. Despite the complex social, cultural, economic and health nature of this question, one of the positive initiatives that he proposed and tested was relatively simple to implement – and resulted in a significant increase in men participating in HIV-testing programmes.  His intervention was to send an invitation letter to husbands / partners home with women participating in the prenatal treatment programmes. The letter invited them to come in for HIV testing and counselling.  The number of men participating tripled as a result.

In 2012 his scientific poster - won first prize at the Congress of the Nordic Federation of the Societies for Obstetrics and Gynaecology. The committee was impressed by the high standard of the abstract.

Competency-building can be a balancing act!

Many of the students who come to CIH to undertake a Master Degree or PhD are supported through the Quota Scheme. Managing the cultural and economic challenges of coming to Norway to study is only part of the challenge they may face! Some, like Byamugisha, must leave full-time jobs knowing they will not be replaced during their absence. The benefits of competency- and capacity-building bring long-term consequences that must be balanced against factors such as increased death-rates during one’s absence.

“Once I had asked Robert Byamugisha to teach me how to do a proper caesarean-section. He had told me the story of the fastest one that he ever did.  That day the woman had been so anaemic and there was no donated blood available so the only 'chance for her' was him to 'be quick' as possible. He asked the nurse that was operating with him to prepare everything, every instrument, every needle and every thread so that no step would take unnecessary time and then they managed to do it in less than 30min. They did not have any fancy equipment available. Weeks later, the father of the child, which had been totally fine at birth, came back from his village somewhere far in the mountains, and gave him a goat with the words that “God may bless him” and that he was so grateful that he could go home with his wife and baby when he had almost given up on both.”

In memory of a good colleague

The Director of CIH, Bente Moen, highlights the tragedy of severe accidents in developing countries, where health and social infrastructures are lacking. She says that Robert Byamugisha’s death is a great loss for CIH, international cooperation and the medical community in Uganda, as well as for his family.

“Robert was the kind of doctor you would have liked to meet if you came sick to the hospital. Caring and at the same time highly skilled. Once he came several hours late for a meeting with me and I was pretty cross. He then explained that that morning they had had two mothers with uterus ruptures (life-threatening condition) and he had to operate one of them before he could go, while his colleague took care of the other one. This illustrates the constant difficulty for clinicians to enter into research but also that Robert had got his priorities right.

His papers about male involvement in the prevention mother-to-child transmission of HIV-1 (PMTCT) are highly cited. His four thesis papers have an average of 15 Scopus-citations, the highest for any of my PhD-candidates! In his hospital, the new Busitema University had just started medical training and Robert was in the process of becoming one of the teachers at the faculty along with his hospital post. We lost him all too early. “

“Robert was studying the topic of male involvement in “Prevention of mother-to-child transmission of HIV”. He was a deeply involved man: As an obstetrician he had improvement of maternal health on top of the agenda. He saw the “big picture” while, at the same time, always also seeing the patient first. He was a true inspiration for his colleagues and friends.”

Professor Rune Nilsen says of Robert that his commitment and involvement highlight the importance and extent of UiB’s work in networking and competency-building in Uganda and elsewhere, particularly in the area of international health.

In the obituary from a paper in Uganda (see .pdf attached), a colleague, Dr. Tom Charles Otim said that “despite the fact he was going for a PhD, Byamugisha was always willing to learn and share  advice, and he remained dedicated to his work. He was very dependable. To him, the expecting mother was his calling. He could cancel any appointment to save her from death. Otim also said that over the past 25 years, Byamugisha had delivered 60% of the babies born at the Mbale Hospital – mostly the ones with complications. Otim concluded by saying that “we were looking forward to using his PhD knowledge to boost the hospital”.

We at the Centre for International Health are deeply moved by his passing. He was our good colleague for many years. We remember how readily he shared his experiences and competency – how much he cared about his work and patients – and how he worked tirelessly to improve the situation for mothers and children. We also remember his inexhaustible good humour – something that is a wonderful asset in a work colleague. We extend our condolences to his family, friends and colleagues at this sad time. 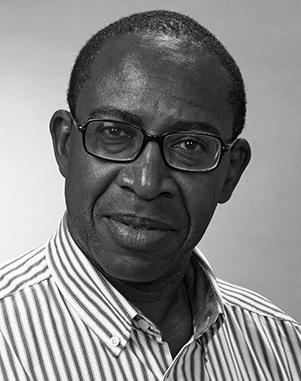