Applicant counts from NUCAS (‘Samordna opptak’) show a 81% increase in the number of applicants to the Department of Informatics, compared to last year.

The Department of Informatics is very pleased with a 81% increase in the number of applicants to the Bachelor programmes – compared to +11% for UiB in general, and just +5% for computer science nationally. In fact, national recruitment to IT studies is bad enough that digi.no is reporting “Low interest in IT-studies”.

”We haven't seen numbers this good since 2004,” says Inger Nilsen, study advisor at the Department. “This year we have focused intensively on recruiting new students.”

“We believe the reorganization of the Bachelor studies has been important for recruitment”, says Inger. Starting this year, the Bachelor studies in Informatics are split into two programmes, datateknologi (computer technology), which is practically oriented, and datavitskap (computer science), which more oriented towards theory and mathematics. The practically-oriented programme is by far the most popular, with 83 applicants, compared to 14 for datavitskap. “Having the word computer (‘data’ in Norwegian) in the name may have helped,” says study advisor Siv Hovland Erstad. “The old name, informatics, isn't used much outside the University.”

“We have put much effort into telling high school students what we have to offer and what informatics is all about,” says Inger. “We've coordinated with teachers, had students visit the Department, and sent Master-students to visit the schools. We're particularly pleased with the recruitment work the Master-students have been doing. Also, the department heads have been great at supporting recruitment efforts.”

Media coverage may also have helped, such as several computer security stories in national media, a tv story about female informatics students, and a visit by computer celebrity Richard Stallman. ”For now it's mostly speculation,” says Inger, “We won't know until the students show up this autumn and we can ask them directly.”

For next year the Department is allocating some of its teaching resources, both staff and PhD students, to recruitment and popularization. “We'll also continue with our school visits and other efforts,” says Siv.

And – does the advisors have any advice for the new students?

“Don't party away your diploma!" says Siv, laughing. “Also, remember to return the application file in time, and pay attention to other deadlines. And – welcome to the Department of Informatics!” 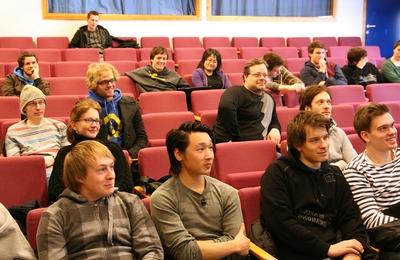 Some of this year’s Bachelor students.
Photo:
Anya Helene Bagge