Felling of large western hemlock trees is under way, and this means a big change in the forest scene in the Arboretum. We hope the public understands that this is an absolutely necessary measure.

The landscape at Langemyra will be transformed when the hemlock forest is gone.
Photo:
Bjørn Moe

After much planning, we are now ready to cut down the western hemlock at the Arboretum and neighboring properties. It is absolutely necessary to remove the seed-producing trees to stop them spreading further into the natural environment. This job is too big for us, so we have hired external help. The work will take place from the latter half of October onwards, and will cause noise from machinery and a lot of traffic in the area.

West American hemlock (Tsuga heterophylla) comes from the west coast of North America where it is associated with coastal and valley areas. It thrives in our humid western climate. Hemlock was included in the forestry plans for forestry, and 2,400 plants were planted at Milde in the early 1960s, most of them in 1961. They were planted both in what is today the Arboretum's area and on the neighboring properties.

Western hemlock is easy to recognize by its drooping branch tips and soft, flat and blunt needles with a white underside. In almost 60 years, the trees have grown large with towering trunks, and today they form a significant part of the forest in the Arboretum. Hemlock produces numerous small cones with seeds from 30 – 40 years of age. The seeds germinate well in both mineral soil and humus. The seedlings are very shade tolerant, and come up in large numbers in many places. The habitat can be both moist swamps and better-drained forest floor with heather, grass and moss.

The many small trees growing up in the area is the result of seed germination and good growth over the past 20 years. Hemlock has become a threat to other species in the Arboretum, both in the natural vegetation and in the plant collections. Of all introduced foreign conifers, hemlock is the one with the greatest potential to spread. The national database, 'Artsdatabanken' has assessed hemlock and placed it on the alien species list, categorised as 'very high risk'.

When the hemlock trees are gone, the environment in the forest will be changed, and areas will be freed up for new plant collections. The measure has received financial support from the State Administrator in Vestland because the hemlock forest in Milde is part of a larger fight against hemlock in the Bergen area. 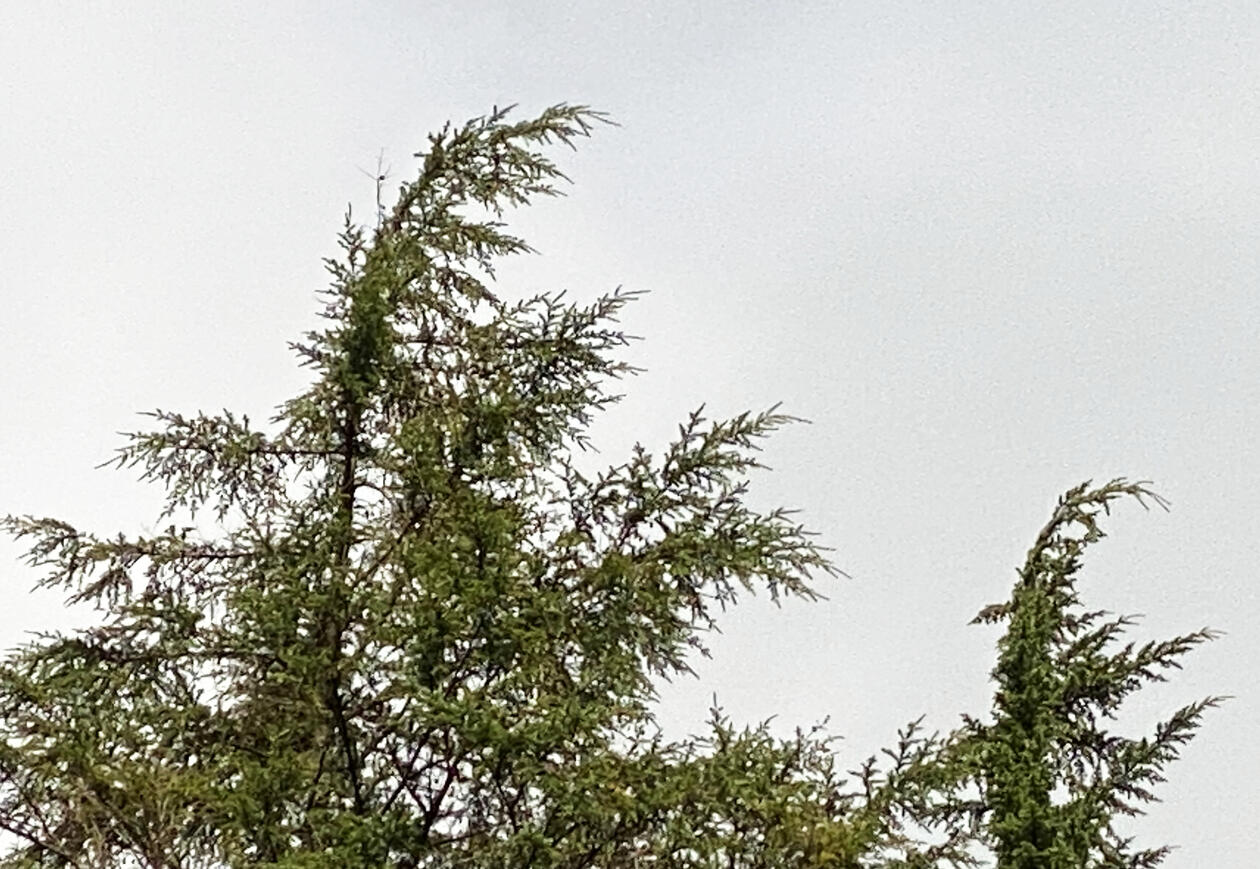 Western hemlock can be recognized by its drooping branch tips.
Photo:
Bjørn Moe 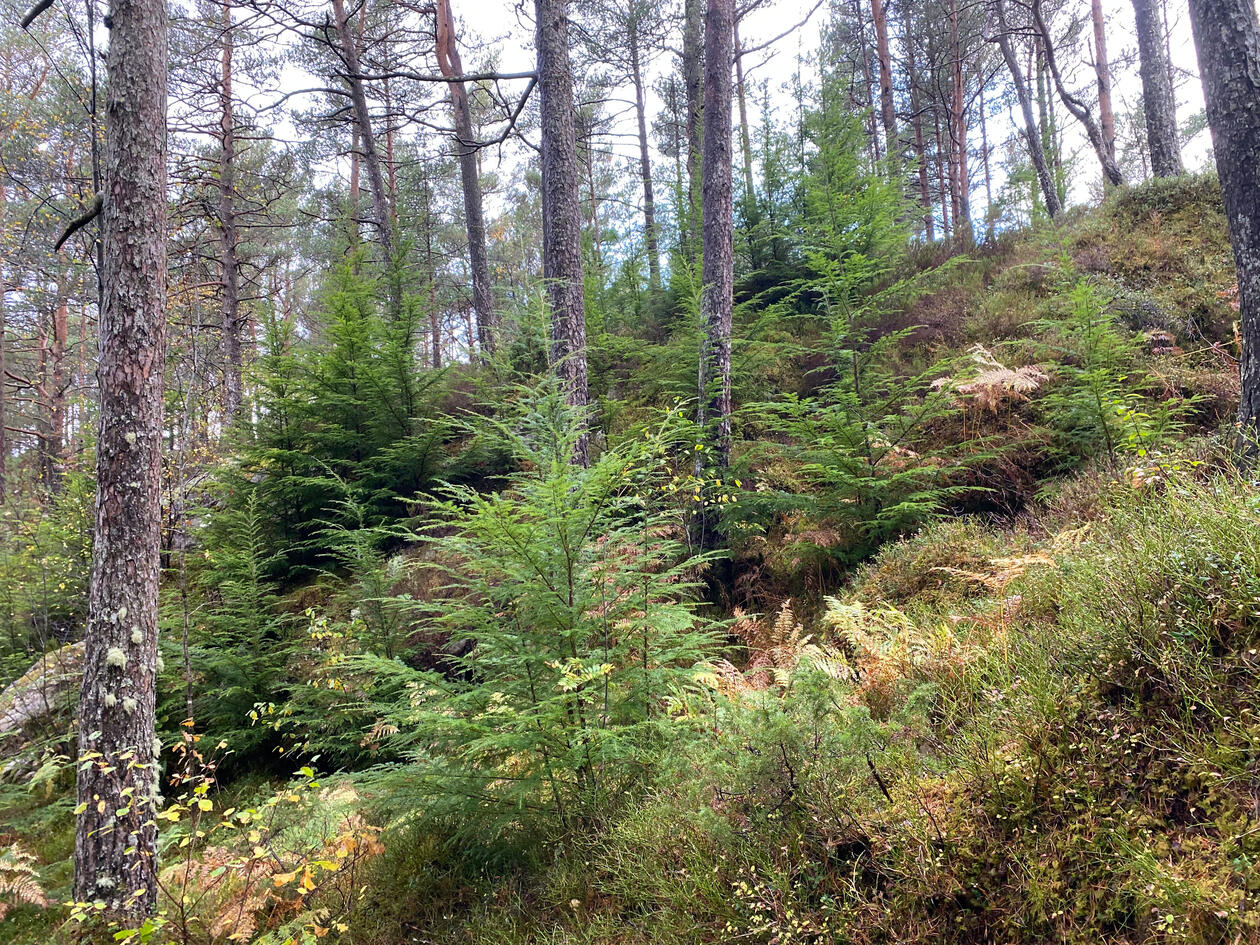 Small trees must be removed before they become large and shade out the natural pine forest.
Photo:
Bjørn Moe 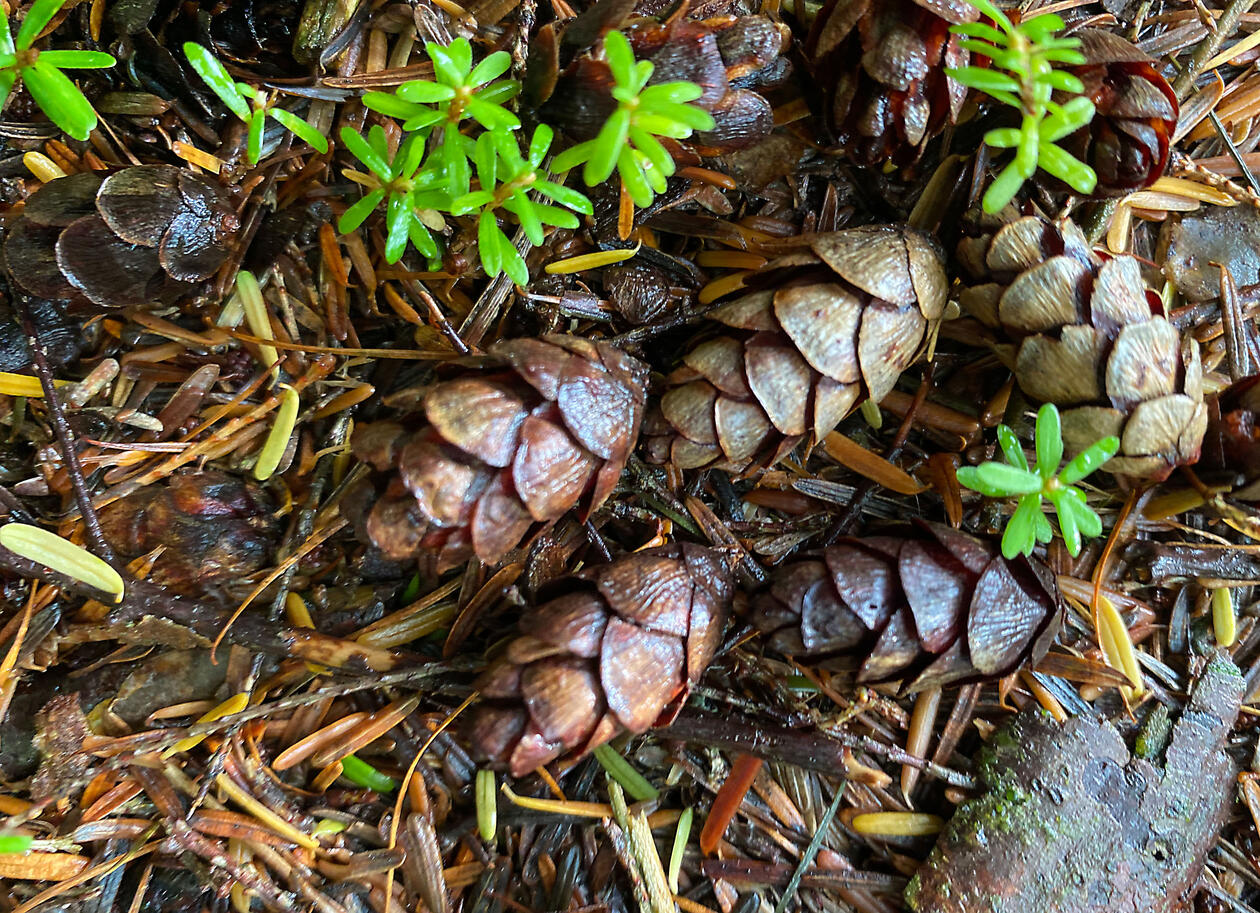 The cones of hemlock are small and the seeds germinate easily in various habitats.
Photo:
Bjørn Moe