Researchers at the University of Bergen have made a major contribution to the discovery of a protein that plays a fundamental role in human energy metabolism.

Marc Niere and Mathias Ziegler at the lab.
Photo:
Privat

Life is an energy-demanding process. The maintenance of vital body functions, such as the contraction of muscles or learning and memory formation in the brain, requires cells and tissues to be fueled with energy that is extracted from the nutrients we take up with our food.

A small molecule called NAD plays a central role in this process of energy transduction. NAD acts like a rechargeable battery – it is charged by food energy and discharged to produce another energy-rich molecule called ATP. ATP is often referred to as the "universal energy currency" as it is made and used by all cells to drive energy-requiring functions.

"Most ATP is produced in mitochondria, known as the cell’s powerhouses. Mitochondria are well shielded from other cellular components by membrane envelopes. Only molecules that are required inside get access and they do so through specific proteins, 'membrane carriers', that form highly selective channels through the membrane. Many of such proteins have been identified. However, even though it is one of the most fundamental molecules, how NAD gets into mitochondria has remained enigmatic", Professor Mathias Ziegler at the Department of Biomedicine explains.

NAD is carried into the mitochondria

He is the leader of a research group that has explored this question for a long time. Already in 2011, they presented evidence that NAD can be synthesized inside the mitochondria, thereby avoiding the necessity of a membrane carrier. However, the enzyme they identified, which catalyzes the formation of NAD in mitochondria, cannot explain all observations.

"We have studied this NAD biosynthesis enzyme intensively for a possible role in mitochondrial NAD generation", says Ziegler. "Yet, from studies on mice lacking this enzyme, we realized that this protein is not essential. Indeed, a technology that my colleague Marc Niere developed to detect changes of NAD at subcellular resolution clearly demonstrated that the mitochondrial NAD content in cells lacking this enzyme is similar to that in normal cells. So, there had to be an alternative", he explains.

Last year, their colleagues from the University of Pennsylvania presented data at an international conference in Dublin supporting another possibility, namely, the presence of an NAD carrier in the mitochondrial membrane:

"The number of potential candidates for such a carrier had already been limited. Using the previously developed technology, professor Marc Niere and I were able to unequivocally confirm that a protein, designated SLC25A51 or MCART1, is the one capable of transporting NAD into mitochondria in living cells. With the discovery of this carrier, a major remaining mystery of the molecular machinery that provides our cells and tissues with the necessary energy has been solved".

An asset for ongoing trials on Alzheimer’s and Parkinson’s

Impairment of mitochondrial ATP production and the ensuing energy deficiency in the brain is considered a major factor in neurodegenerative diseases such as Alzheimer’s and Parkinson’s disease. This links NAD and possibly its now discovered mitochondrial carrier directly to such diseases.

"In fact, the NeuroSysMed Center for Clinical Treatment in Bergen has started clinical trials of supplementation with an improved version of vitamin B3 in patients with Parkinson’s disease. B3 is the vitamin required to make NAD in our cells. Our expertise in the NAD field has been an important asset for these trials", says Ziegler, and adds:

"We are very excited about the opportunity to potentially improve the condition of the patients by treatment with NAD-based therapy. With the new knowledge about how mitochondria are supplied with NAD, we will also be able to get new insights into the disease mechanisms".

The article about the identification of SLC25A51 as a mitochondrial NAD carrier has been published this week in the highly prestigious scientific journal Nature: https://www.nature.com/articles/s41586-020-2741-7 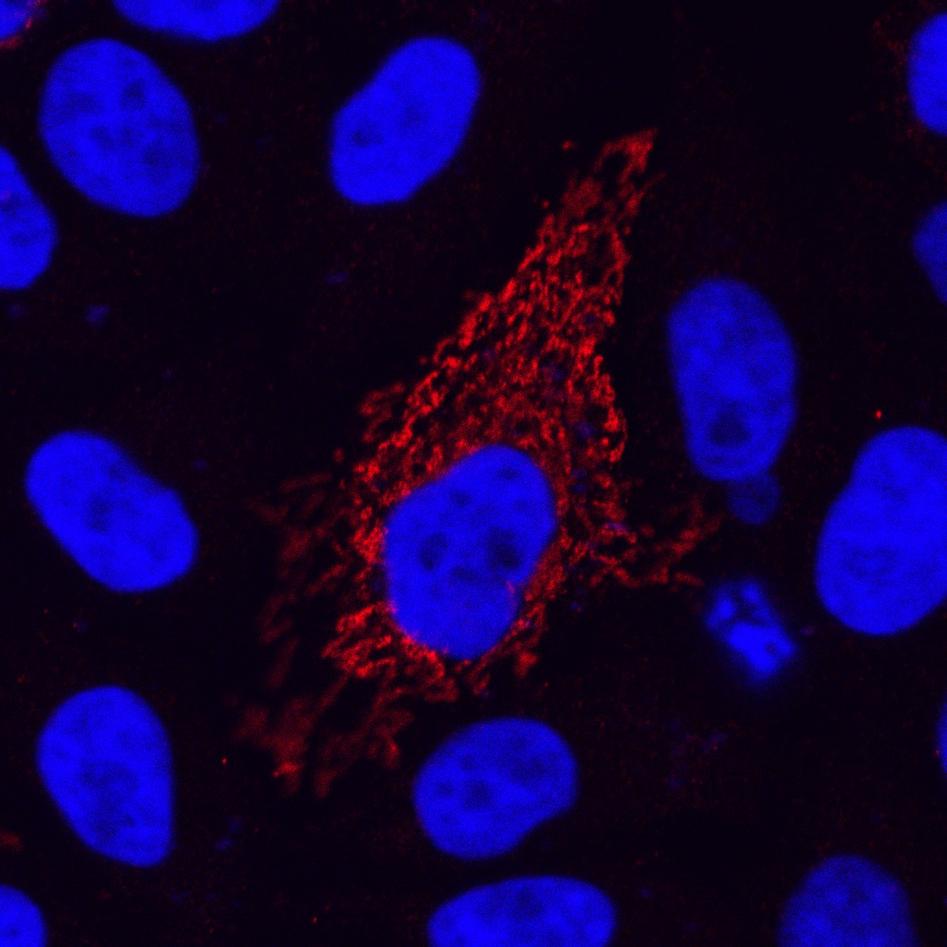 In this photo taken with the help of the technology developed by the lab, you can see the NAD in red inside the mitochondria.
Photo:
Mathias Ziegler / Marc Niere - UiB
Related content 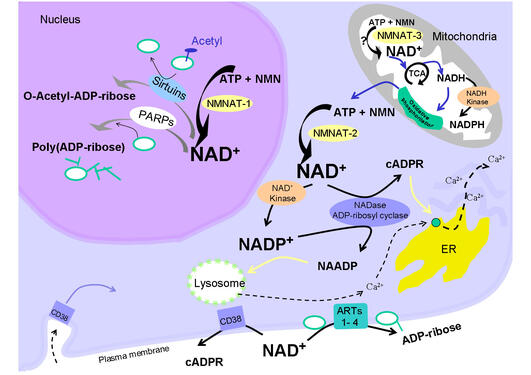