Two genes may merge and obtain altered properties. This is nothing new. Such gene fusions are, however, most commonly associated with cancer development. Researchers at KG Jebsen Center for Diabetes Research have now revealed that this type of mutation also may play a role in chronic pancreatitis, ie persistent inflammation of the pancreas.

The results of the Bergen researchers were published this week in Nature Genetics, the world's leading journal for genetic research. Co-authors are international partners from Germany and France.

From diabetes to pancreatitis

The story began with a search for new genes that can cause diabetes. Eight years ago, researcher Karianne Fjeld and professor Stefan Johansson wondered whether a recently discovered diabetes gene could also affect the risk of other pancreatic diseases. After lengthy and comprehensive investigations the hypothesis finally was proved: a variant of the digestive enzyme carboxyl ester lipase (abbreviated CEL) increases the risk of developing chronic pancreatitis at least five times.

The most common cause of this disease is long-term alcohol abuse. Still, doctors cannot find any apparent explanation in about 20 % of the patients. Recent research has suggested that genetic factors are of particular importance in this patient group, an assumption further confirmed by the findings now published in Nature Genetics.

What is special about the newly discovered disease variant is how it has arisen. The CEL gene has simply been merged with a neighbouring gene. This results in a chimeric protein where the "head" originates from one gene and the "tail" from another. As a consequence, the CEL enzyme accumulates inside the cells rather than being transported to the intestine.

Stefan Johansson emphasizes that the work has been very challenging.

-Today we use large-scale methods with a high degree of automation to discover new genetic causes of disease. However, these methods fail to identify the fusion gene because of difficulties in distinguishing it from the normal gene, he explains.

Karianne Fjeld adds that the study had to be based on a combination of pioneering work and classical molecular genetic methods conducted in over 2000 patients.

-This, together with necessary cell culture experiments, is the reason why it took this long to make our results ready for publication, Fjeld continues.

The research project was led by professors Anders Molven and Stefan Johansson, affiliated with Departments of Clinical Medicine and Clinical Science at the University of Bergen. The project has been funded mainly by the Bergen Research Foundation and the Kristian Gerhard Jebsen Foundation.

-Moreover, this knowledge may prevent the patient from being wrongfully suspected of excessive alcohol consumption. Our research is of general interest because we have showed that modern genetic techniques ignore some parts of our genome. Still, we might also there find important keys to disease! Molven says.

Link to the complete article. 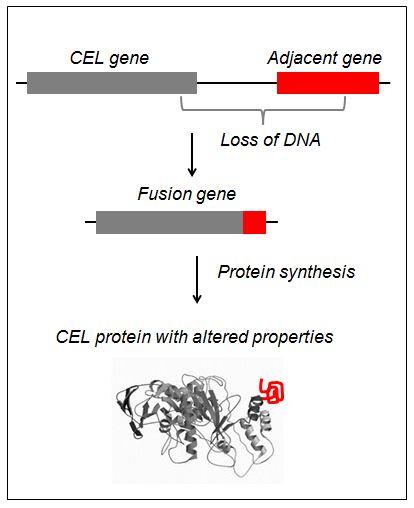 The CEL gene has merged with its neighbour gene. During this process some DNA is lost. The result is a fusion gene, encoding a chimeric protein.
Photo:
Karianne Fjeld, UiB