Repurposing drugs in the spotlight

A publication in PNAS by researchers from the Department of Clinical Science and CCBIO was selected to be highlighted in the Editors' Choice section of Science Signaling, the weekly journal from the publisher of Science magazine, and has been selected for an Editorial feature that will be published in the journal Cell Cycle.

The publication is entitled "Axitinib blocks Wnt/β-catenin signaling and directs asymmetric cell division in cancer" and is available here.

We wanted to know more about the work behind the article, and had a talk with the main authors Yi Qu, Xisong Ke and Karl-Henning Kalland who is the group leader and CCBIO PI.

What was the background for this study?

"This work is based on a recognized strategy where a drug which is already approved for human use, is screened for new effects and new targets. We now understand that small molecule substances might have more than one molecular target in cells. This strategy, called repurposing, is also potentially fruitful because we already know that these drugs are introduced to and distributed in the organism with acceptable and known side effects. It is also often the case that "new substances" which are promising in cell culture, fail the requirements for absorption, distribution and acceptable side effects when they are later tested in the human body."

And what specific focus did you start out with?

"This work focused specifically on screening for substances that could inhibit the WNT/beta-catenin signaling pathway. Screening identified Axitinib, which otherwise is used to treat certain types of kidney cancer. The work goes a long way in identifying new mechanisms and targets for Axitinib. One interesting point is that cancer cells which divide symmetrically or on "full speed", returns to a more controlled, or asymmetric cell division when using Axitinib, as in normal stem cells in the body. This was associated to asymmetric distribution of WNT/beta catenin signals in daughter cells, and the asymmetric distribution of newly formed DNA in daughter cells."

What can this mean for new cancer therapy, and how will you proceed with the investigation of Axitinib?

"A particularly interesting aspect showed in the study is that this relationship affects cancer cells specifically. WNT/beta catenin signals in normal stem cells were less affected. The study combined new chemoproteomic methods to expose which molecules Axitinib binds to in the cells, which revealed a new principle for the regulation of this signal pathway. The work opens for further investigation of the regulatory principles and to verify whether chemical derivatives of Axitinib may have a greater binding affinity to the new molecular targets. We are also planning to test the behavior in immune cells in a combination strategy between dendritic cell-based immunotherapy and targeted molecular therapy."

We congratulate all the co-authors with the publication, and look forward to more results! 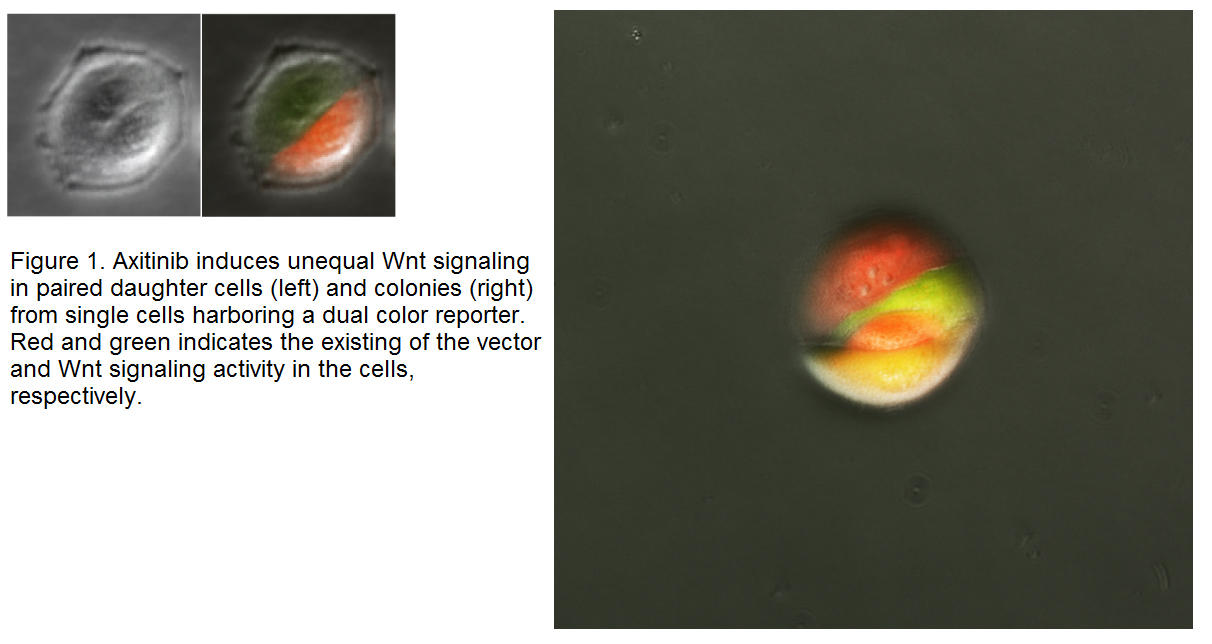