In 1989, it was shown that TP53 gene mutations are frequent in human cancers and are associated with poor clinical outcome. In the 90s, it was established that cancer treatments might restore p53 activity, which in turn triggers tumor clearance. The rapid progress enticed clinicians and pharmaceutical companies to intensify their efforts and to invest heavily in translating p53 into the clinic.

This worldwide effort led to the findings that p53 and its acquaintances seem to be necessary to understand the evolving landscape of cancer therapy, including examples of platinum-conjugates and PARP inhibitors in TP53 mutated ovarian cancer. Moreover, the knowledge of the p53 partner and regulator MDM2 has spawned the new drug family ubiquitin E3 ligase inhibitors. In the late 90s, the understanding of p53 sparked reasonable hopes that cancer could be beaten by the 2020s.

However, this understanding has led to no major breakthrough in cancer treatment. Moreover, the finding that the TP53 gene is alternatively spliced, and thus co-express up to 12 different p53 proteins (p53 isoforms) that regulate p53 tumor suppressive activities, have led the cancer research community to shift its interest away from p53 in the quest for new potent cancer-related genes easier to work with and translate into the clinic. The International Cancer Genome Consortium was thus created to identify, in an unbiased manner, the most frequently mutated genes in human cancers by sequencing the entire genome of 25,000 tumors derived from 25 different tissues. The results are overwhelming. TP53 emerges by far as the most frequently mutated gene in human cancers, indicating there are no alternative and easier roads to cancer treatment than to break the p53 isoform code.

To decipher the p53 isoform code, several p53 isoform antibodies have recently been developed at the University of Dundee, and their validation in collaboration with CCBIO laboratories is currently ongoing. Hopefully, the antibodies will enable identification of patients with high risk of cancer progression and guide in the decision making of the most effective cancer therapy. Thus, p53 isoforms may open large and exciting avenues to cancer treatment. 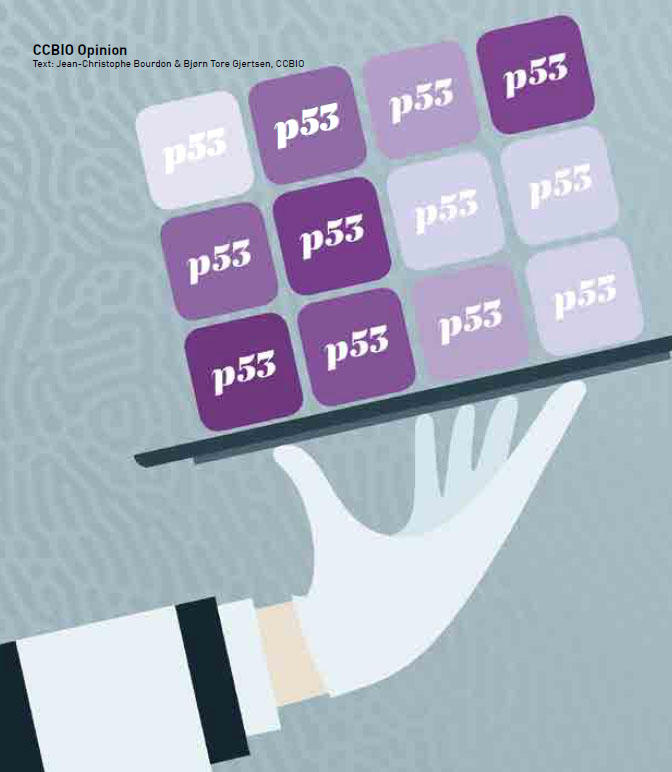