How to take mentoring seriously in a context of ‘fast’ research?

October 3rd 2018, CCBIO hosted a special seminar titled "The Importance of Mentoring for Career Development", where panellists Marsha A. Moses (Harvard Medical School/Boston Children’s Hospital), Roopali Roy (Harvard Medical School/Boston Children’s Hospital), Roland Jonsson (Faculty of Medicine/UiB) and Anne Blanchard (SVT/CCBIO) discussed mentoring in different forms and settings, and provided useful advice and food for thought for both mentors and mentees. Is mentoring just a matter of respecting national legislation? Who should be involved in mentoring? How can we encourage mentoring practices in a more systematic way, particularly in a context of ‘fast’ research and short-term contracts?

Based on a long-standing scientific collaboration with the Vascular Biology Program (VBP) at Boston Children´s Hospital and Harvard Medical School, CCBIO has now teamed up with Harvard scholars through the INTPART collaboration, aiming for increased contact and mobility between our institutions. Harvard faculty were invited to teach at the CCBIO long course Cancer-Related Vascular Biology, and CCBIO students have recently returned from internship at VBP in Boston. The INTPART collaboration has also included the organisation of two thematically related CCBIO Special Seminars: one discussing quality and excellence in science, and last week, one discussing the importance of mentoring for career development. This seminar was organized and facilitated by the CCBIO- INTPART coordinator, Associate Professor Elisabeth Wik.

The panellists provided varied and complementary perspectives on mentoring, stemming from their different cultural and disciplinary background, as well as their different experiences as ‘mentors’ and ‘mentees’. It was made clear that mentoring is a long-term effort that goes beyond the time-limited academic support of ‘finishing a task’ (e.g., delivering a thesis or getting a paper published). Mentoring also engages in reflections on future career paths (both in and outside of academia), and provides insights on the cultural and institutional norms in different fields, both in terms of how the science is produced, but also at a more structural level (what about gender issues, hierarchy, administrative matters?). It is therefore different to ‘supervision’ or ‘coaching’, which are more short-term ways of supporting a colleague.

Professor Moses and Dr. Roy shared different models of mentoring, while putting forward the importance of going beyond the traditional ‘one-on-one’ model. They argued that ‘developmental mentoring’, where a network of mentors come into play for the different career aspects of the mentee, was useful and efficient for proving the mentee with regular and varied guidance. In that model, the mentee takes an active part in identifying his/her career goals, and maps and conveys his/her own network of mentors who can help both academically and personally. Both Professor Moses and Dr. Roy, respectively in their capacity as mentor and mentee, voiced the importance of initiative- and risk-taking, long-term commitment, fluid communication, flexibility and openness for having a fruitful and mutually benefiting mentoring relationship.

Despite its central importance for creating a research environment that is balanced, innovative and responsible, mentoring faces important structural limitations. As recalled by Professor Jonsson, Vice Dean of Doctoral Education, in 2009 in Norway, only 18% of PhD candidates ended up in a career within academia (these numbers are higher for the fields of medicine and health, with about 53% of candidates continuing in research and development). Dr. Blanchard also pointed at the strong discrepancy between men and women pursuing a career in academia after a post-doctoral project; with much fewer women going on to positions of assistant, associate, and full professor. In a context of fast science, characterised by short-term contracts, implementing long-term mentoring relationships is difficult, but it is necessary and steps need to be taken to take mentoring seriously systematically.

How to take mentoring seriously systematically?

As the audience noticed, there were few senior researchers present at the seminar; which raised the question of how to create enthusiasm and encourage discussions and reflections around mentoring and the way to implement it systematically. All speakers provided insights into how to make mentoring part of the academic culture. Professor Moses and Dr. Roy put forward the importance of not being forceful, but rather creating incentives for encouraging mentors to engage time and effort in such activities. They also both emphasised the importance of informal interactions for motivating constructive mentoring relationships. Professor Jonsson argued for the importance of preparing junior researchers already at an early stage for future mentoring roles, and reiterated the importance of sharing and passing on transferrable skills. Dr. Blanchard voiced her concerns about the discrepancy between men and women in higher academic positions, and argued for a particular care around gender issues in mentoring.

In sum, while mentoring is one of the main pillars for creative, balanced and responsible research, it is not yet systematically part of the academic culture. The CCBIO Special Seminar on this topic was a first step towards this vision; it started important discussions and showed these need to be ongoing for mentoring to be taken seriously. 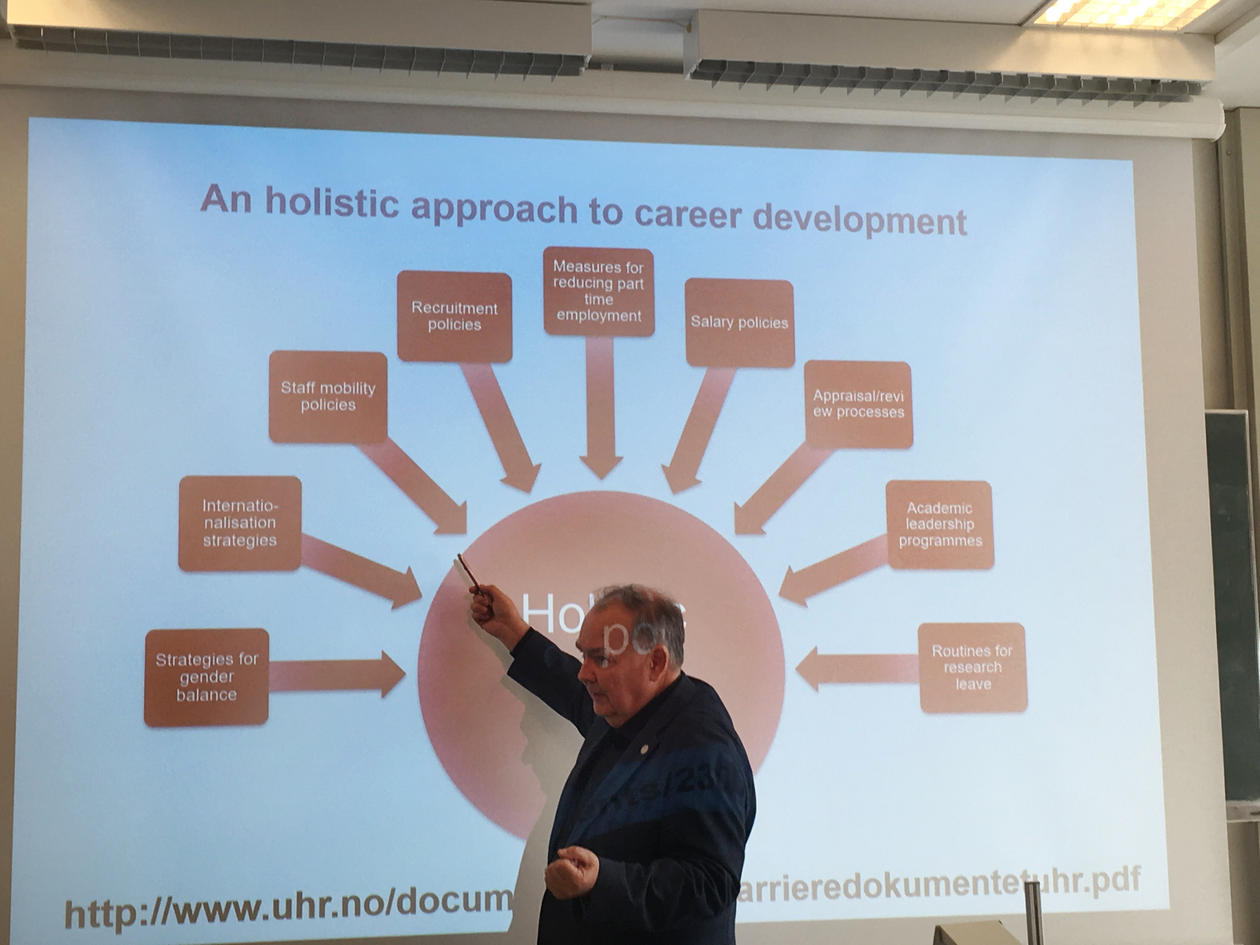 Vice Dean of Doctoral Education, Roland Jonsson, in the middle of a holistic approach to career development.
Photo:
Ingeborg Winge 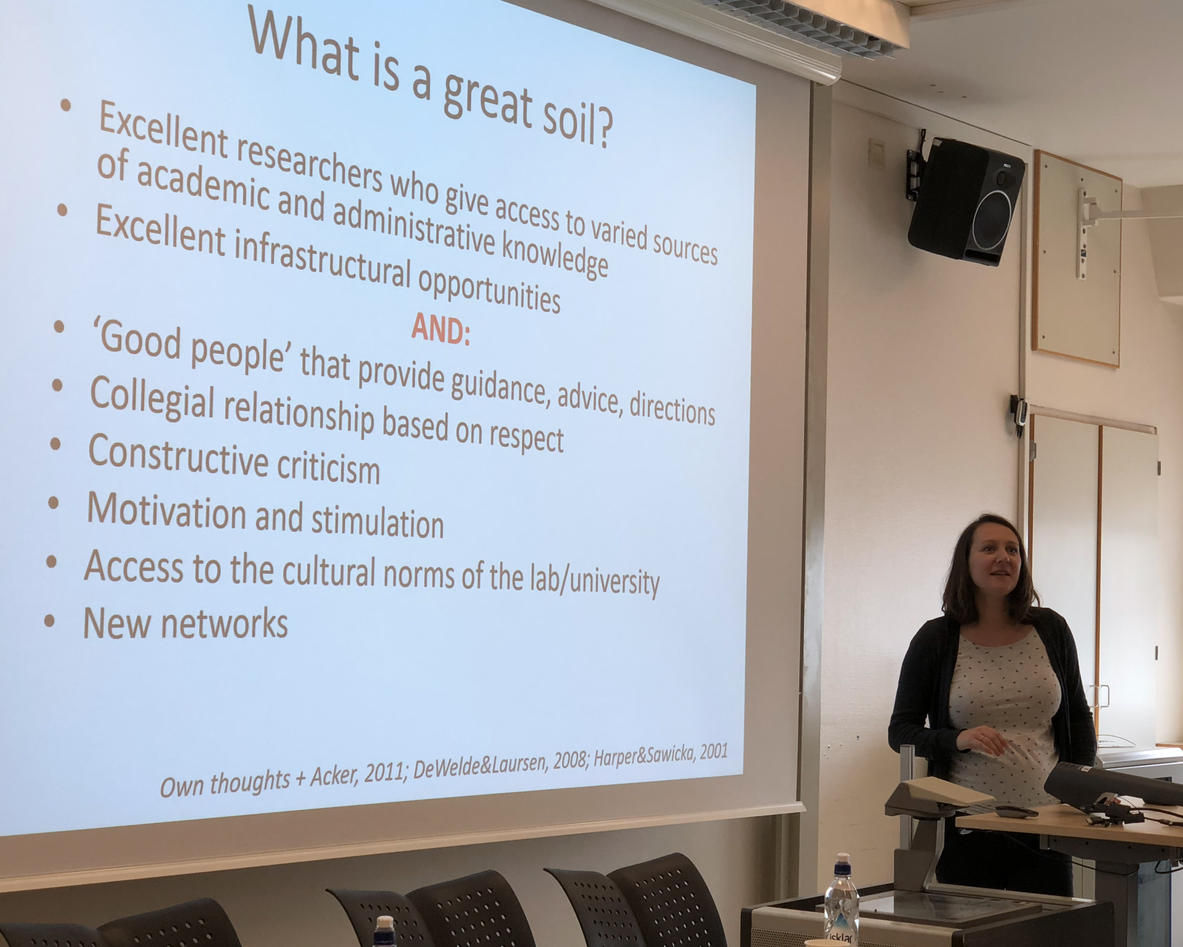 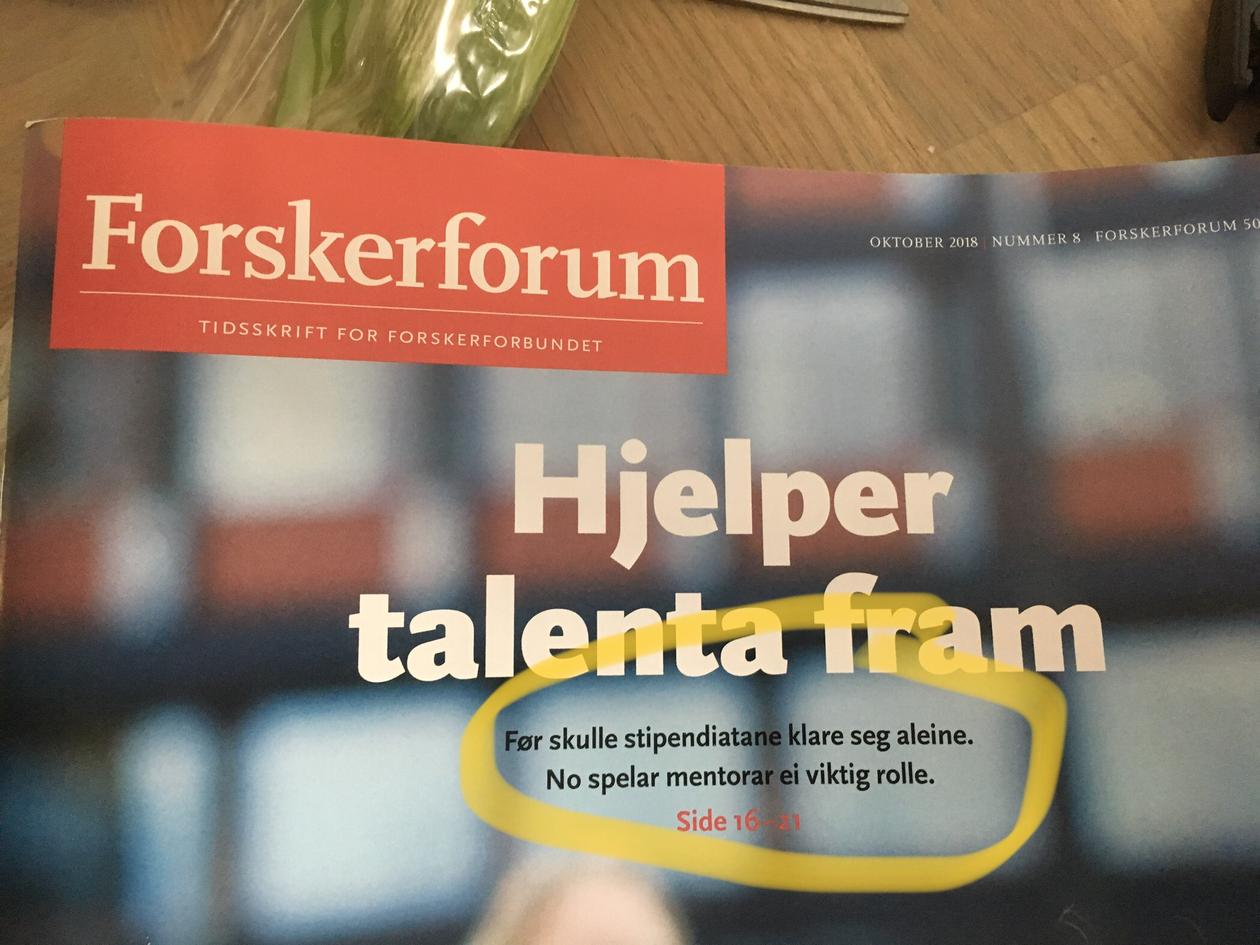 Mentoring is a current issue in research environments. Recent (Oct 2018) issue of "Forskerforum" headlines "Promoting the talents. PhDs/Fellows used to be left to themselves. Today, mentoring plays a crucial part."
Photo:
Ingeborg Winge