Excited children and adults crowded the Research Fair when researchers at the Center for Cancer Biomarkers (CCBIO) performed a play about the cancer cell Greedy Frieda.

How can a cancer cell manipulate other cells and the immune system in the body, and how can it be stopped? Excited children got to take part in the fight against cancer in an interactive play about the cancer cell Greedy Frieda. They got to be workers at the cancer cell's construction site, the body's own police cells, and young researchers in the laboratory.

"We wanted to create something that would both be exciting and educational for the children", says Post Doc Agnete Engelsen at the Center for Cancer Biomarkers (CCBIO). Engelsen, Researcher Gro Røsland and several other young Fellows and enthusiasts from CCBiO, assisted PhD Fellow Henriette Ertsås who initiated and directed the play. This turned out to be a great way of communicating their research at the Research Fair of the Bergen Research Days.

In the play we meet the inventive and manipulative cancer cell Greedy Frieda, performed with great presence by PhD Fellow Henriette C. Ertsås. Greedy Frieda has made herself a home in a corner of the Research Fair and in the beginning the children in the audience are easily persuaded to bring her both nourishment and blood, in the form of sweet buns and red juice.

But Greedy Frieda is never satisfied; she demands more and more. She is even able to persuade the children to connect her to the system that controls blood circulation. When the immune system sends police cells to stop her, she cunningly tricks them and continues to eat, grow and expand her territory.

"The aim of the show is to illustrate how cancer cells manipulate other cells in the body, and how researchers work to knock out unmanageable cancer cells through targeted therapy", Engelsen explains.

Eventually the children realize that Greedy Frieda is not to be trusted. The young researchers are introduced to the laboratory where they, together with researchers from CCBIO, identify a characteristic in the cancer cell that can be attacked, so that she no longer can avoid the police cells. Finally, by new targeted treatment, they succeed in stopping Greedy Frieda.

The victorious young researchers are awarded with diplomas and colourful balloons for their fight against cancer, leaving no doubt that they are true researchers to-be. 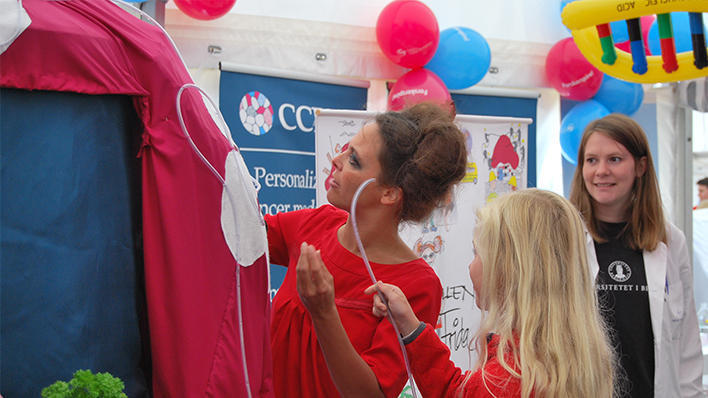 Greedy Frieda the cancer cell persuades the audience to help her connect to the body's blood circulation.
Photo:
Randi Holmås 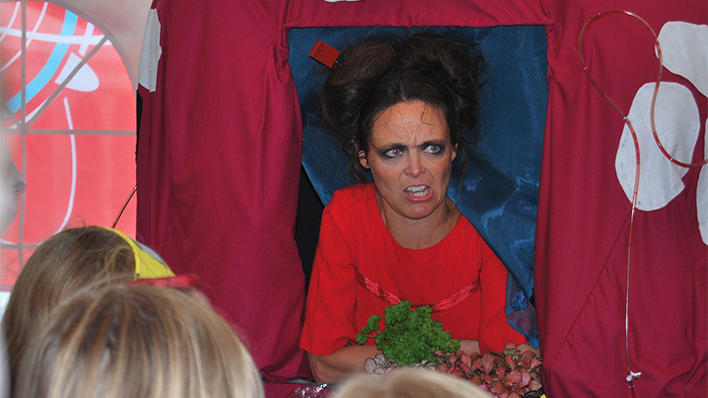